Alastair Campbell defended the suggestion of former Prime Minister Tony Blair returning to the political scene to advise the Government on how to best tackle the coronavirus pandemic. The proposal, which would also see other former Prime Minister help Boris Johnson through the crisis, however has met with widespread public criticism. Mr Campbell, the former spin doctor to Mr Blair at Number 10, was engaged in a heated debate with journalist Dawn Neesom as they both appeared on the Jeremy Vine on Five show on Wednesday. 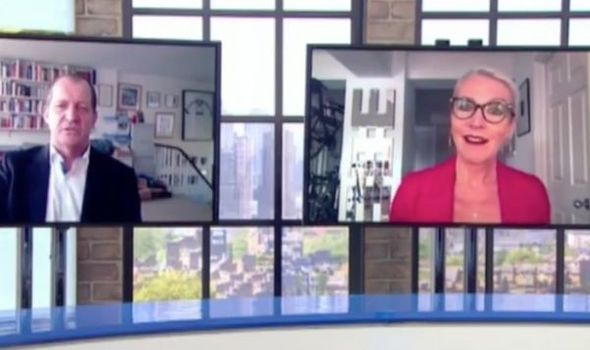 The pair repeatedly traded barbs on the prospect of Mr Blair returning to the political scene, with Ms Neeson mockingly hitting out at Mr Cambell.

The journalist said: “I’m Tony Blair look at me! How much is he going to charge for his plan?”

But Mr Campbell immediately struck back: “Dawn, don’t judge people by your own standards.”

Host Jeremy Vine was ultimately forced to intervene to put an end to the exchange to allow members of the public to weigh in on the issue.

READ MORE: Tony Blair questioned on whether Boris should face inquiry like ex-PM over Iraq War