Home » Health » The Covid-19 Plasma Boom Is Over. What Did We Learn From It?

The U.S. government invested $800 million in plasma when the country was desperate for Covid-19 treatments. A year later, the program has fizzled.

Scott Cohen of Plainview, N.Y., nearly died from the effects of Covid-19 and received convalescent plasma as part of his treatment. When he later recovered, he went on to donate his own plasma 11 times.Credit…Desiree Rios for The New York Times

By Katie Thomas and Noah Weiland

Scott Cohen was on a ventilator struggling for his life with Covid-19 last April when his brothers pleaded with Plainview Hospital on Long Island to infuse him with the blood plasma of a recovered patient.

The experimental treatment was hard to get but was gaining attention at a time when doctors had little else. After an online petition drew 18,000 signatures, the hospital gave Mr. Cohen, a retired Nassau County medic, an infusion of the pale yellow stuff that some called “liquid gold.”

In those terrifying early months of the pandemic, the idea that antibody-rich plasma could save lives took on a life of its own before there was evidence that it worked. The Trump administration, buoyed by proponents at elite medical institutions, seized on plasma as a good-news story at a time when there weren’t many others. It awarded more than $800 million to entities involved in its collection and administration, and put Dr. Anthony S. Fauci’s face on billboards promoting the treatment.

A coalition of companies and nonprofit groups, including the Mayo Clinic, Red Cross and Microsoft, mobilized to urge donations from people who had recovered from Covid-19, enlisting celebrities like Samuel L. Jackson and Dwayne Johnson, the actor known as the Rock. Volunteers, some dressed in superhero capes, showed up to blood banks in droves.

Mr. Cohen, who later recovered, was one of them. He went on to donate his own plasma 11 times.

But by the end of the year, good evidence for convalescent plasma had not materialized, prompting many prestigious medical centers to quietly abandon it. By February, with cases and hospitalizations dropping, demand dipped below what blood banks had stockpiled. In March, the New York Blood Center called Mr. Cohen to cancel his 12th appointment. It didn’t need any more plasma. 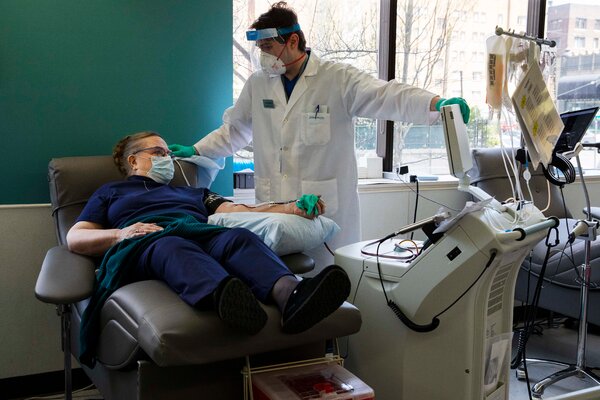 A year ago, when Americans were dying of Covid at an alarming rate, the federal government made a big bet on plasma. No one knew if the treatment would work, but it seemed biologically plausible and safe, and there wasn’t much else to try. All told, more than 722,000 units of plasma were distributed to hospitals thanks to the federal program, which ends this month.

The government’s bet did not result in a blockbuster treatment for Covid-19, or even a decent one. But it did give the country a real-time education in the pitfalls of testing a medical treatment in the middle of an emergency. Medical science is messy and slow. And when a treatment fails, which is often, it can be difficult for its strongest proponents to let it go.

Because the government gave plasma to so many patients outside of a controlled clinical trial, it took a long time to measure its effectiveness. Eventually, studies did emerge to suggest that under the right conditions, plasma might help. But enough evidence has now accumulated to show that the country’s broad, costly plasma campaign had little effect, especially in people whose disease was advanced enough to land them in the hospital.

In interviews, three federal health officials — Dr. Stephen M. Hahn, the former commissioner of the Food and Drug Administration; Dr. Peter Marks, a top F.D.A. regulator; and Dr. H. Clifford Lane, a clinical director at the National Institutes of Health — acknowledged that the evidence for plasma was limited.

“The data are just not that strong, and it makes it makes it hard, I think, to be enthusiastic about seeing it continue to be used,” Dr. Lane said. The N.I.H. recently halted an outpatient trial of plasma because of a lack of benefit.

Doctors have used the antibodies of recovered patients as treatments for more than a century, for diseases including diphtheria, the 1918 flu and Ebola.

So when patients began falling ill with the new coronavirus last year, doctors around the world turned to the old standby.