It’s 81 degrees at 2 p.m., and James Lawrence, who is grinding through his fourth running mile for the day, declares in a raspy whisper that he feels “great.” He might be lying.

Lawrence, who is also known as the Iron Cowboy, is on day 92 of 100 of a self-created challenge called the Conquer 100. The goal is to swim 2.4 miles, bike 112.21 miles, and run 26.2 miles for 100 days in a row. With the help of his wife Sunny, the 45-year-old created a course near his home in Lindon, Utah, even convincing the city to open its outdoor pool on March 1, when he started the journey.

Now 12,931.4 miles later, Lawrence looks tired. His shins are taped, his skin is red, and at this point, his “run” is more of a brisk walk. But he’s surrounded by supporters making today’s journey with him. He will not stop. And despite his worn appearance, he is smiling. When asked why he’s doing it, his answer is simple.

“I wanted to challenge my body and mind,” Lawrence says. “Seventy-five didn’t scare me, so it had to be 100.”

Lawrence has built a career out of doing hard things. In 2008, after losing his home and car in the recession, he left his job as a mortgage broker and started over. He went to work for his father-in-law at a nonprofit that invests in solutions for water scarcity called In Our Own Quiet Way. At the same time, he was achieving physical goals that showed him how to live without doubt and fear.

Lawrence’s endurance journey started when his wife signed him up for a marathon—but sticking to just running bored him. His friend challenged him to race a sprint triathlon, which opened up a whole new world. After his first experience running a half-Ironman in 2008, he was hooked.

In 2011, Lawrence completed 20 half-Ironman distances in 22 weeks, accidentally setting a world record, and then in 2012, he completed 30 full-Ironman distances in a year, averaging just under 12 hours for all 30 races, to set another world record. Wanting an even more audacious goal, Lawrence then completed 50 Ironman triathlons in 50 states in 50 days in 2015, while raising money for In Our Own Quiet Way.

So, what does one do next after achieving all that? Exactly what Lawrence is attempting now. He calls these 100 days of swimming, cycling, and running his retirement. (And while the Conquer 100 course is the same length as a full Ironman-distance triathlon, it is not sanctioned by Ironman.)

For the Conquer 100, Lawrence is dedicating funds raised to Operation Underground Railroad, which saves trafficked children and seeks to put an end to child slavery. He has raised about $200,000 so far, about $50,000 short of his fundraising goal.

On mornings when he doesn’t feel like getting out of bed and to the pool by 5:30 a.m., Lawrence thinks about the cause. But he also thinks about his family, the example he wants to set for his five children, and the feeling of achieving a seemingly impossible goal.

“The ‘why’ changes every day. Some days I have to fight to find a ‘why,’” he says. “But in the end, it’s about doing what I set out to do—what I said I was going to do. We are all born with certain levels of grit, but we choose whether or not to cultivate it. I am always challenging my own tenacity—I always have.”

To train for the Conquer 100, Lawrence logged bike and swimming miles to prime his body for the volume he would face. He kept running to a minimum to prevent injuries from impact. His philosophy is that after building a base, the first 10 140.6-mile days will train your body for the next 10 days and so forth.

“Most people wait until they think they have the perfect plan. Don’t. Just go for it.”

Despite his fitness level and experience, Lawrence is dealing with a level of pain and injury that he never has before. He has experienced hip discomfort, an ankle sprain, and shooting pain in both shins. To aid recovery, he spends about two hours in an Eleve Hyperbaric Oxygen chamber that is set up in his home each night. He also ensures he is eating about 10,000 calories worth of anti-inflammatory foods, basically shoveling fuel in his mouth from the moment he wakes up, as he bikes and runs, until he falls to sleep.

“It still hurts,” he says. “One of the biggest lessons I’ve learned in this experience is that I can tolerate a higher level of pain than I once thought. In some ways, though, I feel like the pain is divine intervention. Many of the people who have joined us for the run have told me that they would not have been able to do it if it wasn’t for the slower pace.” 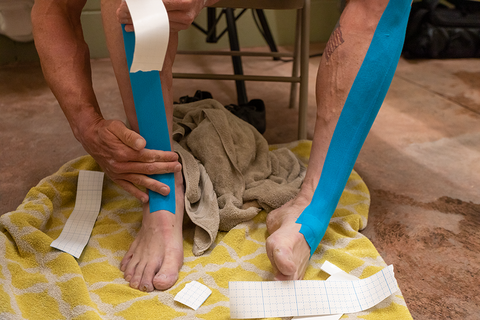 Lawrence is still moving at a decent clip, averaging a 11:27/mile pace for the run. Some people join him for three miles and others stay for the entire race. Lucy Lawrence—who is his social media manager, publicist, and 18-year-old daughter—estimates that more than 1,000 people have joined him on one or all of the portions of the Conquer 100 so far.

“The community support has been outstanding,” he says. “To be able to share this with others has been a true gift.”

He welcomes supporters and hopes to teach them that, with work and sacrifice, huge goals are possible. As Lawrence hobbles through the fifth mile of the day’s marathon, he stares straight ahead. The countdown to 100 is down to single digits.

“If you want to challenge yourself, the hardest thing to do is start,” he says. “Most people wait until they think they have the perfect plan. Don’t. Just go for it. You will learn and grow on the journey.”

Lawrence is expected to finish the Conquer 100 on Tuesday, June 8.