Food firms in the UK including McDonald’s are urging the government to toughen up rules designed to protect rainforests.

Ministers are planning a new law forbidding big firms to use produce from illegally deforested land.

But the firms say the law should apply to all deforestation, whether it’s legal or illegal.

That’s because the effect on the climate, and on nature, is the same if trees are felled legally or not.

The firms have written a letter to the government on the closing day of its consultation on forest protection.

It says: “Restricting action to illegal deforestation would not achieve halting the loss of natural ecosystems, especially when governments have discretion to decide what is legal.”

The 21 signatories include including Unilever, Tesco, Lidl, Nando’s, Nestle, the convenience food maker Greencore and the chicken producer Pilgrim’s Pride. 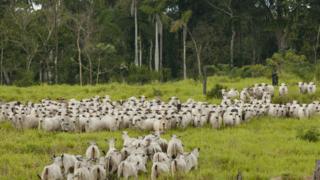 Currently the government’s plans refer only to major companies like these, but the signatories say this would allow medium-sized firms to continue importing large amounts of commodities from previously forested land.

They are pressing for a level playing field so smaller operators don’t gain a competitive advantage.

The letter represents something of a breakthrough for environmental campaigners.

They’ve have long argued that it’s pointless for the UK to protect its own landscape – as the Prime Minister says he intends – if ingredients in food or fodder such as beef, cocoa, soy, rubber and palm oil have contributed to environmental destruction abroad.

Robin Willoughby, from the green group Mighty Earth said: “The proposed legislation would continue to allow rampant deforestation in hotspots such as Indonesia and Brazil (where much of the deforestation is legal).

“With the Amazon in flames and forests being cut down at an alarming rate, Nature doesn’t recognise the difference between legal and illegal deforestation.”

A government spokesperson agreed that the expansion of agriculture should not damage other ecosystems and promised ministers would explore ways of avoiding this “displacement” effect.

The spokesperson said tackling illegal forest-felling was the obvious place to start.

She added: “Our proposed approach is designed to tackle illegal deforestation which accounts for nearly 50% of deforestation globally, but nearer 90% in key biomes, including part of the Amazon.

“Were existing forest laws in Brazil to be properly enforced, experts believe that forest cover would increase by 10%.”

Chris Brown, Sustainable Sourcing Director at Asda, said: “We welcome efforts the government has made so far to tackle deforestation.

“But current plans won’t do enough to protect fragile ecosystems.

“We need comprehensive reporting up and down the supply chain, alongside incentives for suppliers who move towards more environmentally-responsible production.”

There has been growing dissatisfaction among consumers about products connected to illegal deforestation, especially in the Amazon.

According to a recent survey from the environment group, WWF, 67% of British consumers say they want the government to do more to tackle the issue.

Some 81% of respondents wanted greater transparency about the origins of products imported into the UK.

Fuelling these concerns are reports showing that deforestation in the Amazon has increased sharply this year.

The felling of trees and the clearing of land, usually for agriculture, is estimated to be responsible for 11% of global greenhouse gas emissions.

Although some environmentalists have supported the letter to government, other say the proposed targets are inadequate.

McDonald’s, for instance, has set a deadline of 2030 for removing rainforest products from its supply chain – a date critics say is far too late.