DETROIT (Reuters) – Ford Motor Co (F.N) on Thursday outlined the safety measures it will institute to restart its most profitable U.S. plants amid the coronavirus pandemic, expanding on similar efforts by General Motors Co (GM.N) and Fiat Chrysler (FCHA.MI)(FCAU.N) to convince leaders of the United Auto Workers union to send members back to work. 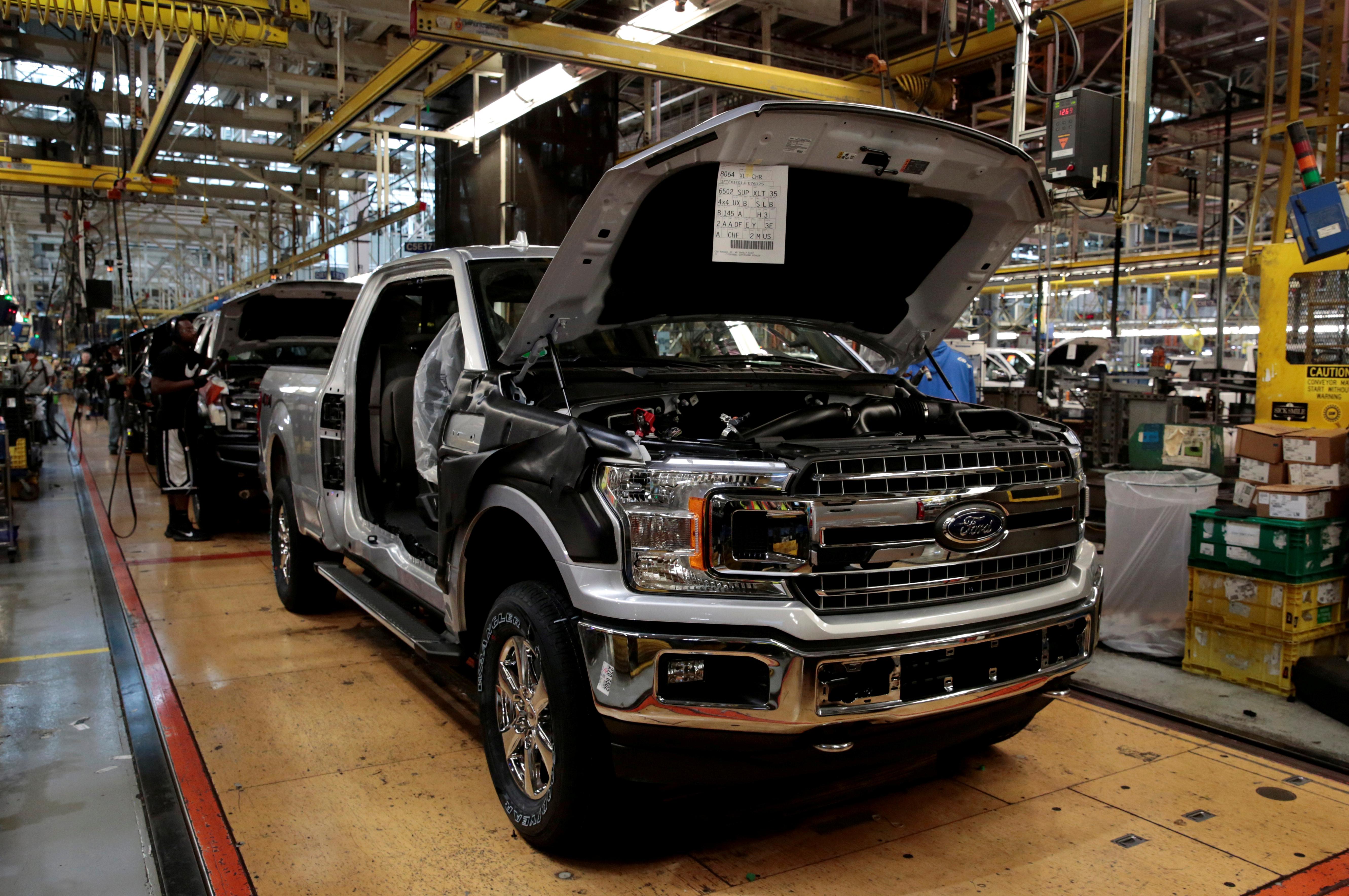 The UAW so far has not agreed to endorse reopening U.S. auto plants, even as workers in Europe and Asia are going back to their jobs. Virtually all U.S. automotive production ground to a halt in March as the number of COVID-19 infections grew rapidly.

Billions of dollars in revenue and profits are riding on how quickly Ford and its U.S. rivals can convince the UAW and Michigan Governor Gretchen Whitmer that it is safe to return to work. The UAW declared that early May was too soon to reopen, and since then has not agreed to a date.

Without Michigan, the Detroit Three and other automakers operating in the United States cannot build vehicles. Ford executives highlighted that the U.S. auto sector accounts for 6% of U.S. economic output.

Ford has the largest unionized workforce in the United States with about 56,000 UAW members. The F-series pickup trucks UAW workers build account for $50 billion in annual revenue, Ford said.

Farley added he would “absolutely” be comfortable having his family work in a Ford plant given the steps the company has taken to ensure employee safety.

UAW President Rory Gamble said the union is negotiating with the Detroit automakers about safely reopening their U.S. plants. Among the issues on the table are what types of protective gear workers should have, how fast assembly lines should move and how much testing should be done.

“The UAW is asking for as much testing as is possible to prevent exposure to the virus,” Gamble said in a Thursday statement.

Ford’s human resources chief Kiersten Robinson said the automaker will not have a “reliable and scalable testing solution” for COVID-19 for several weeks if not months and the company was forming a task force to see how it can move faster to achieve that.

“Longer term, we think it will be critical,” she said. “Hopefully, in coming weeks or months, it will be part of our protocol.”

Ford manufacturing chief Gary Johnson said any worker who worried they had been exposed would be sent to a hospital for testing and the UAW had agreed to that process.

Johnson said the company was not planning to provide workers with N95 respiratory masks, which are designed to filter 95% of airborne particles, as the regular face masks and shields were good enough.

Slowing the speed of production lines in plants would be too complex, he added. Some union leaders have suggested lines could be slowed to allow for greater physical separation between workers.

What Ford will do in its plants is no-touch doors, require use of personal protective equipment like face masks and shields, install barriers where employees must work closely together, use thermal scanning to screen employees for fevers and do heavy sanitizing of work areas.

Ford executives said they have been using the same safety protocols already in China, where production restarted in late February.

The Dearborn, Michigan-based company did not provide a date for restarting U.S. factories. Ford did say white-collar workers would likely return to their offices in late June or early July.

Officials in Whitmer’s office could not immediately be reached to comment on Thursday. She extended the state’s stay-at-home order through May 15 but has lifted restrictions for some businesses other than manufacturing. Neighboring Ohio is allowing manufacturing to resume on Monday.

In its restart playbook, GM’s strategy relies heavily on many of the same approaches as Ford, but does not address assembly line workstations. The No. 1 U.S. automaker has not provided a target for a U.S. restart.

FCA has retreated from its plan to restart North American operations on May 3 given Michigan’s extended stay-at-home order. It is using similar measures to Ford. Tesla Inc (TSLA.O) Chief Executive Elon Musk was highly critical on Wednesday of the various states’ stay-at-home orders, which have idled the electric carmaker’s California plant. He called the policies “fascist.”