Sainsbury’s is to restrict purchases on all grocery products and shut its cafes and fresh food counters as supermarkets step up their efforts to combat coronavirus panic buying.

The move comes after Tesco said its 24-hour stores will start to close overnight so shelves stripped bare by worried consumers can be restocked.

“Considerable” stockpiling has led Morrisons to report that sales have risen 5% year-on-year since the start of February.

Britain’s food retailers have urged households to refrain from hoarding goods after worries about the virus prompted heavy demand for products such as toilet roll and UHT milk.

But they are now taking further steps as the problems continue – with the extent of panic purchasing appearing to widen.

Sainsbury’s chief executive Mike Coupe wrote to customers on Wednesday – and said customers will now only be able to buy a maximum of three of any grocery product.

A cap of two is going to be imposed on the most popular items, such as toilet roll, soap and UHT milk.

“We have enough food coming into the system, but are limiting sales so that it stays on shelves for longer and can be bought by a larger numbers of customers,” he said.

Meat, fish and pizza counters and cafes are being closed from Thursday to free up lorry and warehouse capacity, as well as shelf-stacking time, for essential items to be replenished.

The company is also taking steps to help elderly and vulnerable customers and beefing up its online “click and collect” offer.

Its decision to ration products comes after discount rival Aldi said on Monday that it was limiting customers to four items of any one product.

Waitrose emailed customers on Wednesday to say that it too was “reluctantly” introducing limits on some of its most in-demand online items. 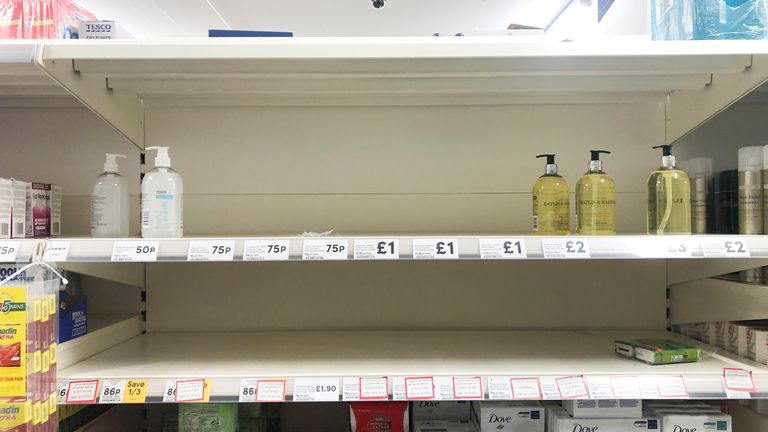 Tesco said its decision to close 24-hour stores between 10pm and 6am was “to ensure we can serve customers better at this time”.

A spokesperson said: “It gives our colleagues the time overnight to restock the store, replenish the shelves and support our online grocery service at a time when demand is high.”

Morrisons said on Monday that it planned to hire 3,500 more workers as it expands online delivery services to help it meet demand during the coronavirus crisis.

Supermarkets should get a boost from a business rates holiday announced by chancellor Rishi Sunak among a package of measures to deal with the economic fall-out of the COVID-19 crisis.

Sainsbury’s welcomed the measures. It said it paid £500m in business rates on its stores in the financial year to March 2019.