Home » Beauty & Balance » They Got Lost in the Woods, Then Eloped in the Snow

On their second date, Dr. Anais Ovalle and Emily Black got lost hiking at the Moose Hill Wildlife Sanctuary in Sharon, Mass. Snow fell and then it got dark. Even though they lost cellphone service for a while and eventually had to call an Uber to get to their cars, both kept their cool.

Dr. Ovalle would later refer to that date, which took place March 4, 2018, in her wedding vows. “We absorbed the peace of being in each other’s presence,” she said. “We witnessed the beauty of the world around us. This was when I knew a life with you would be different.”

Ms. Black, 33, is a project manager in the Boston office of Autodesk, a software company based in San Rafael, Calif. Although she completed law school, she decided she did not want to practice law, nor marry the man she was engaged to, nor “check off all the boxes,” as Southern women like her are supposed to do, she said. And in 2017, she had a health scare that made her not take things for granted.

Dr. Ovalle, 31, grew up in New Jersey and the Dominican Republic. She attended medical school in Santo Domingo and returned to the United States for residency. “I could be myself here and fall in love,” she said.

She is an infectious disease fellow and preventive medicine resident at Dartmouth-Hitchcock Medical Center in Lebanon, N.H., where the couple now live.

During her residency, Dr. Ovalle was living in Providence, R.I. Her first marriage had ended, and when not at the hospital, she frequented a coffee shop, where she said she asked out any woman “who looked like she might be queer.” This strategy didn’t work so well.

In January 2018, she begrudgingly went on Tinder, where Ms. Black, living in Boston, stood out. 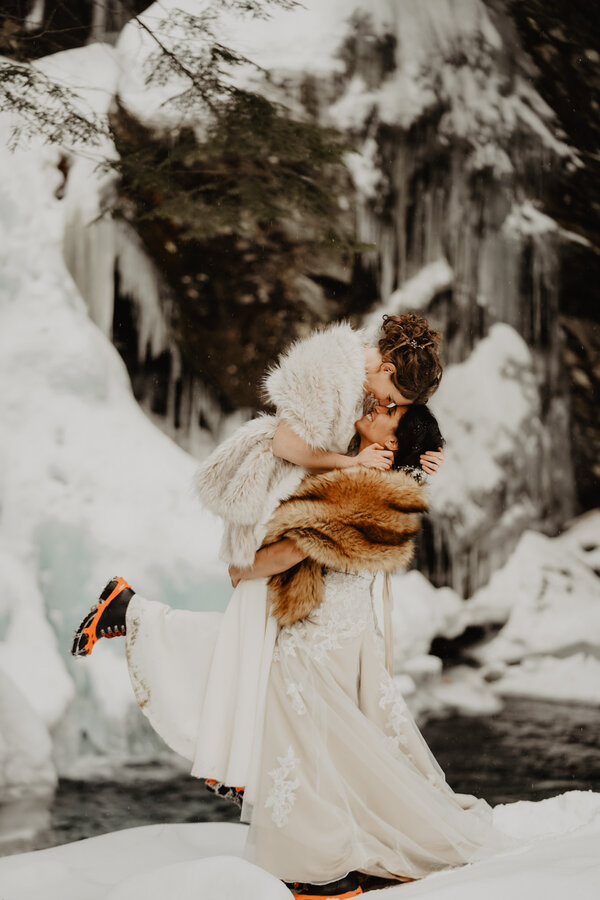 They exchanged messages for more than a month. They chose a bar halfway between them, in Foxborough, Mass., to meet in February 2018. They stayed for more than five hours, and even chatted outside after the bar closed.

Both say they were immediately taken with the other. In the coming months, though, Dr. Ovalle needed to make decisions about where her career might take her. They discussed which locations would work for Ms. Black. But, being one for grand gestures, Dr. Ovalle wanted to make one. Knowing that Ms. Black wanted a dog, she found a miniature American shepherd in Missouri and booked flights.

“She just has the biggest heart and sense of adventure,” Ms. Black said. “She cares so much about the world and about doing good in the world.”

Dr. Ovalle was the first to ask Ms. Black to be her girlfriend, and to say “I love you.” Ms. Black felt strongly that she should be the one to propose.

Dr. Ovalle wasn’t having it. She repeatedly asked Ms. Black to marry her. “Not yet” became a common refrain.

In May 2019, Ms. Black planned a weekend getaway in Portland, Me., where she presented a photo album to Dr. Ovalle, ending with a proposal and a ring.

They planned to marry in New Zealand in March 2021, giving friends and family an excuse to travel there, but the coronavirus pandemic intervened.

Instead the two eloped during a ski vacation at Green Mountain Inn in Stowe, Vt. They were married there March 4 by Mitzi McInnis, a justice of the peace. Just the couple, their officiant and a photographer were in attendance.

After the ceremony, both brides donned faux fur stoles over their wedding gowns and boots with spikes to hike to the frozen Bingham Falls — scouted out by Dr. Ovalle — for photos. They are taking the name Ovalle-Black.

“I always feel like I’m buzzing internally,” Dr. Ovalle said. “But when I’m around Emily, I feel this internal calmness. She knows what I’m feeling without my having to speak.”