But, if they were there from the beginning, what changed?

Bitcoins are both praised and treated as a Ponzi scheme. While some think it incentivizes renewable energy, some are concerned with the amount of energy it spends. Tesla bought $1.5 billion of the cryptocurrency and started accepting it as payment in February, already aware of all these discussions. Yet, Elon Musk announced the company would not accept it anymore until “mining transitions to more sustainable energy.” But why only now?

As soon as Tesla announced dealing with bitcoins, it was criticized for the cryptocurrency’s carbon footprint. For a company that demands a fast track for building permits in Germany for “spreading e-mobility,” it sounded contradictory to invest and accept bitcoins, as critics and fans alike pointed out. 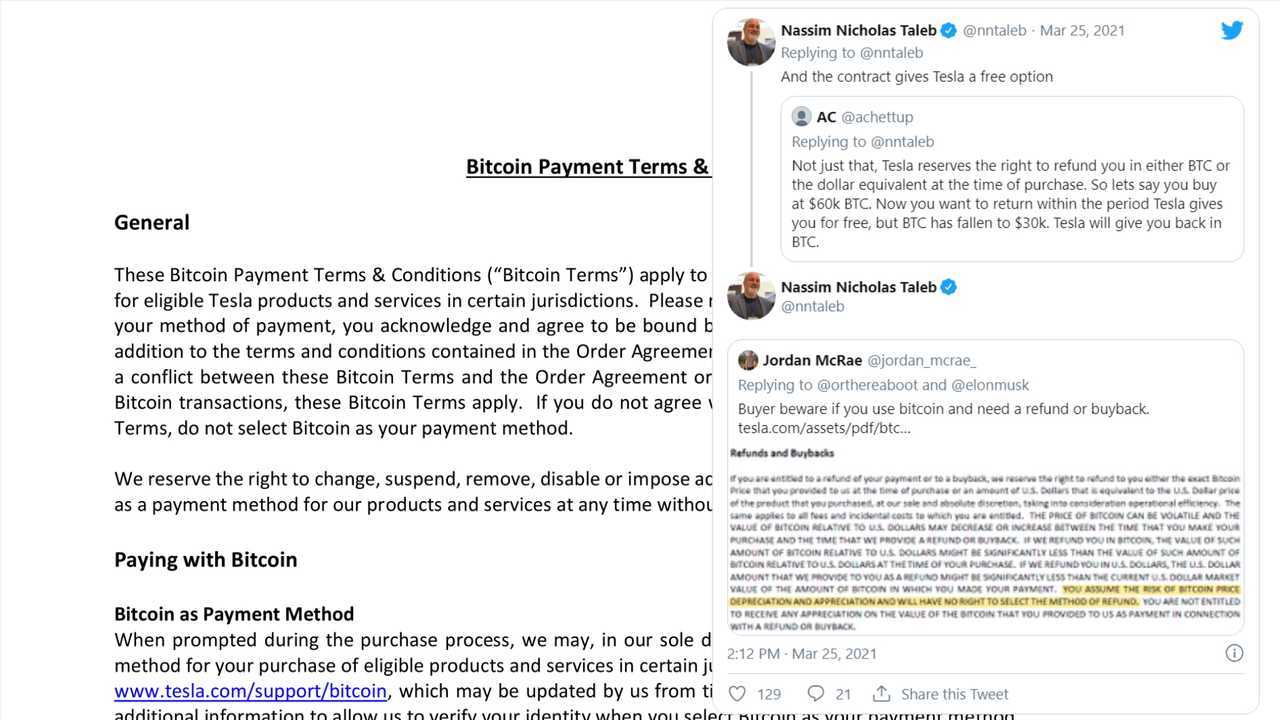 Nassim Nicholas Taleb, an old critic of bitcoin, warned publicly on Twitter that buying a Tesla with the cryptocurrency could be a terrible deal due to the conditions involving the purchase. He even disputed calling it a cryptocurrency: for the author of “Skin In The Game,” it is more of a speculative item.

On April 22, Musk seemed more certain than ever that bitcoin was the way to go when he agreed with Jack Dorsey, Twitter’s CEO, that bitcoin “incentivizes renewable energy.”

Less than one month later, this is Musk’s tweet announcing the decision not to use bitcoin anymore.

Although discovering the reason for the change would be enlightening, the decision’s effects are probably more relevant. Reuters talked to some specialists, and Mark Humphery-Jenner, an associate professor of finance at the University of New South Wales, expressed concerns about how Tesla makes decisions. In his opinion, it seems to be a “very hasty and precipitous” way.

Another criticism Tesla received about dealing with bitcoins was that the company made a profit from selling $171 million of its $1.5 billion stake for $272 million, pocketing $101 million in the process, and improving its Q1 2021 results. In his tweet, Musk states that Tesla will keep the bitcoins it currently has and use them again when generated with more sustainable energy.

Burning coal or other fossil fuels is just part of the environmental problem with the cryptocurrency. As an energy-intensive process, bitcoin mining will still consume resources that could be better applied elsewhere, such as powering Tesla cars. Claiming to deliver energy-efficient vehicles and using cryptocurrencies that spend as much energy in a year as the Netherlands did in 2019 is also contradictory.