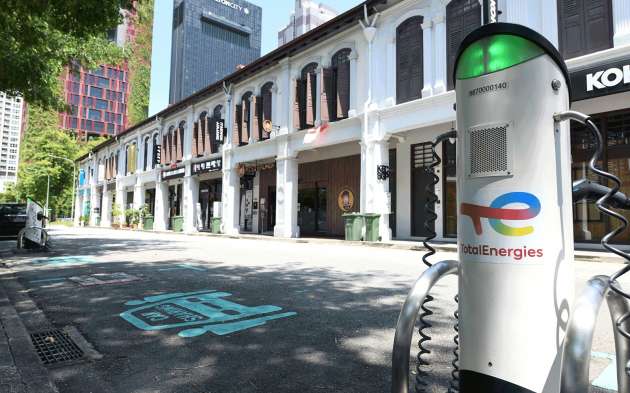 Some updates on the electric vehicle (EV) charging infrastructure in Singapore. EV drivers in the republic are now able to access more than 3,000 public charging points across the island, which is a 50% increase from that available a year before. As of end-July, there is roughly one public EV charging point for every two battery-powered vehicles in Singapore, the Straits Times reports.

The latest additions include more than 200 chargers located in 70 public carparks, part of a pilot tender announced last September by the government, in which chargers will be installed in 200 public carparks. The country’s land transport authority (LTA) said that another 400 charging points will be up and running by early next year.

Charging point operators said that while it is still early in the game, they have been encouraged by a notable increase in the use of public EV chargers in recent months. For example, ComfortDelGro Engie, which is installing 479 of the chargers in 155 public carparks under the pilot tender, said that use of its public chargers has tripled since April. It has installed more than 100 chargers so far.

TotalEnergies, which has 1,500 EV charging points primarily catering to its BlueSG car-sharing service, said that from May last year to May this year, use of its public chargers has also more than tripled. It added that it has opened up more of its charging points to the public, with 455 accessible as of August 1, in response to increased demand.

The big push is yet to come. In what will be a major expansion of the EV charging infrastructure, a large-scale tender to deploy at least 12,000 more public charging points at housing development board (HDB) carparks is expected to be awarded later this year.

Comprising 10 packages split by geographical areas, the project – which drew 11 bids – is aimed at making all HDB towns EV-ready by 2025. The LTA previously said it is targeting to build 60,000 charging points in both public and private premises by 2030, the majority of which will be normal or slow chargers, as these do not need extensive and costly changes to the power grid.

The LTA said it will use what it has learnt from the pilot tender to refine and expedite the deployment
process for the large-scale HDB deployment. It added that it will evaluate bids for the HDB project based on the ability of bidders to achieve financial sustainability while preserving the affordability of EV charging services.