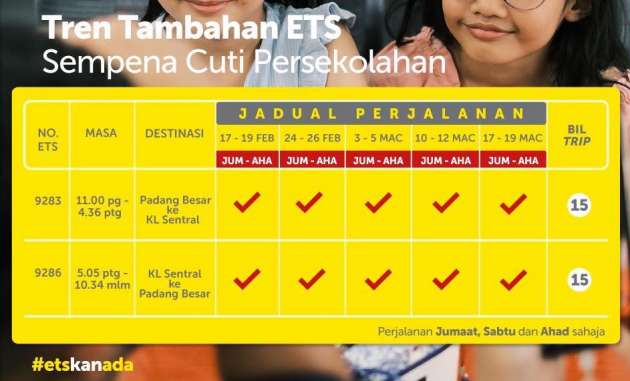 KTM has announced extra ETS train services for the upcoming school holiday season in February and March. If you’re planning to skip traffic jams and take the train, it pays to book early as ETS uses a flexible fare system, which means that tickets bought earlier will be cheaper, vice versa.

The extra train services are for five consecutive weekends (Friday to Sunday) from February 17-19 to March 17-19. Train number 9283 will depart Padang Besar at 11am and reach KL Sentral at 4.36 pm. Three extra trips per weekend makes it 15 extra southbound trips for the period.

Train number 9286 will depart KL Sentral at 5.05 pm and reach Padang Besar at 10.34 pm the same day. Again, this is every Friday, Saturday and Sunday for five consecutive weekends, for 15 extra trips heading north.

Tickets will be open for sale 10am tomorrow (January 26) on the KTMB Mobile app or KTM’s website. The ETS is a good alternative to spending hours on the road and in the jam, and there’s even a business class coach for those who want extra comfort and meals onboard. By the way, Thailand’s SRT shuttle and express train from Padang Besar to Hat Yai is back in operations after the flood that happened in December.