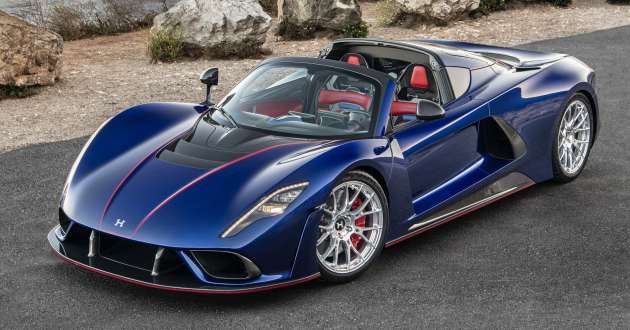 Hennessey Special Vehicles has unveiled the new Venom F5 Roadster, which is essentially a convertible version of the coupe that made its debut in December 2020. Priced at USD3 million (RM13.464 million), only 30 units will be offered, each individually commissioned to owners’ tastes.

Mechanically, the Venom F5 Roadster is identical to its fixed-roof sibling, retaining the company’s Fury V8 engine. The 6.6 litre twin-turbocharged unit delivers 1,817 horsepower and 1,617 Nm of torque, all of which is sent to the rear wheels through a seven-speed single-clutch semi-automatic gearbox.

The company did not provide much in the way of performance figures, but it has its sights set on surpassing the world’s fastest convertible record – 427.4 km/h (265.6 mph) – currently held by its own Venom GT Spyder.

Visually, the F5 Roadster looks similar to the coupe, albeit with some slight changes to enable an open-air driving experience. The first is the removable panel that makes the vehicle more of a targa rather than a full cabriolet. Made from carbon-fibre composites, the single-piece roof is lined with Alcantara upholstery and weighs just 8 kg.

It’s an all-manual affair to install and remove the roof panel, although the company says it’s a relatively easy process, with just four quick-release bolts and two high-strength latches that require attention. Owners will be able to stow the roof panel in a Merino wool travel bag or have it propped up on a pedestal to display as a sculpture. Without the roof, the top speed is reduced. the company noted.

Besides the removable roof, the F5 Roadster also sports a new tempered glass engine window that allows onlookers to view the Fury engine. Hennessey says it was no easy task to create the viewing window, with considerations required for the aerodynamic forces generated at speeds over 482.8 km/h (300 mph) and heat generated by the V8. On the latter, the panel can handle up to 540 degrees Celsius and the accompanying carbon-fibre engine cover is littered with heat exits.

Another distinguishing factor are the wheels, with the convertible sporting new seven-spoke forged alloys available in either a silver finish or polished aluminium – both fitted with titanium bolts. With all said and done, the F5 Roadster weighs 1,405 kg, which is just 20 kg heavier than the coupe.