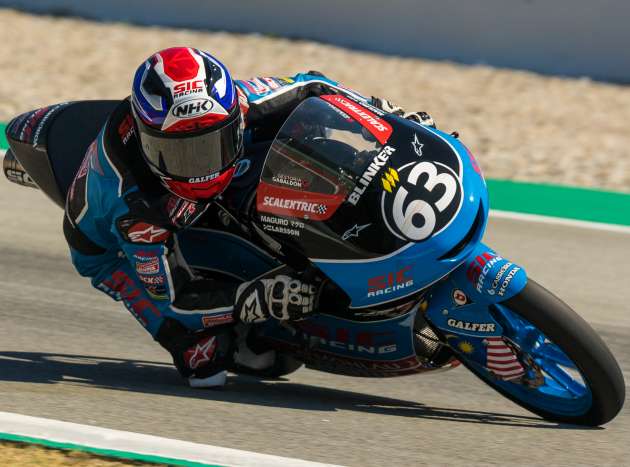 Double podium place finishes in Spain for Malaysian 2022 FIM JuniorGP racer Syarifuddin Azman, or Damok as he is popularly known. Racing on the weekend at the Catalunya circuit, Damok, riding for SIC Racing under Team Monlau Motul finished second in both Race 1 and 2, placing him third in the current riders’ championship standings.

“I am really happy with this weekend because I managed to be on the podium for both of my races. As I promised to all of you, I will make magic this weekend. And these 2 trophies are for all of my team, my family, friends, supporters, and all Malaysians,” said the Selangor boy. Damok was pipped to the post by eventual dual race winner Jose Antonio Rueda of Team Estrella Garcia, and was followed in third by Filippo Farioli of Aspar Junior Team.

Syariffudin also had a close fight with team mate Angel Piqueras, who finished the weekend fourth in both races. Damok, with 62 points, is lead in the JuniorGP championship by Rueda in top position with 108 points and David Salvador of Laglisse Academy with 69 points.

Meanwhile, in the European Talent Cup, Hakim Danish is third in the championship despite finishing 10th in last weekend’s race. During Race 1, a rider suffering a mechanical fell in front of Hakim but was successfully avoided, with the young racer from Terengganu chasing hard to catch the lead group.

“I am thankful that I finished in the top 10 to collect points. But I was not really satisfied with this round because I know I can do better,” said Hakim. The FIM JuniorGP championship returns to Jerez, Spain for the fourth round on the weekend of July 3.