Daihatsu has filed patent images of an unnamed sedan with Indonesia’s Directorate General of Intellectual Property (DGIP), which is under the purview of the country’s ministry of law and human rights. According to DGIP’s database, the filing was made by Osaka-based Daihatsu Motor Co. (DMC) and carries the application number A00202204663 as well as an announcement date of December 28, 2022.

Two people – Eishi Araki and Shun Ohoka – are named as the designers of the Daihatsu sedan, which bears a striking resemblance to the fourth-generation Toyota Vios that made its debut in Thailand last August. Now built on the Daihatsu New Global Architecture (DNGA) platform, the latest Vios has since made its way to Indonesia, Laos, Cambodia and Brunei.

Depending on the market it is sold in, the sedan is available with engines from the NR family that have capacities ranging from 1.2 to 1.5 litres, paired with either a five-speed manual or CVT. It is also larger than its XP150 predecessor and can be pretty well equipped on higher-end variants.

The discovery of the patent images does suggest that Daihatsu may offer a more affordable take on the Vios, although the carmaker is not confirming anything of the sort just yet, at least according to CNN Indonesia.

In a report, Sri Agung Handayani, director of marketing and director of corporate planning and communications of Astra Daihatsu Motor, said “this is a routine registration conducted by the DMC for the copyright of the vehicle” and “for now, we do not have a plan for this.”

Toyota is the parent company of Daihatsu, and the latter was responsible for the DN F-Sedan Concept that previewed the AC100 Vios. As such, it’s not a surprise if Daihatsu follows through and introduces its own sedan in the future. In fact, there are currently several Toyota and Daihatsu models that share ties in Indonesia, including the Rocky–Raize, Ayla–Agya, Sigra-Calya, Xenia–Avanza as well as the Terios–Rush. 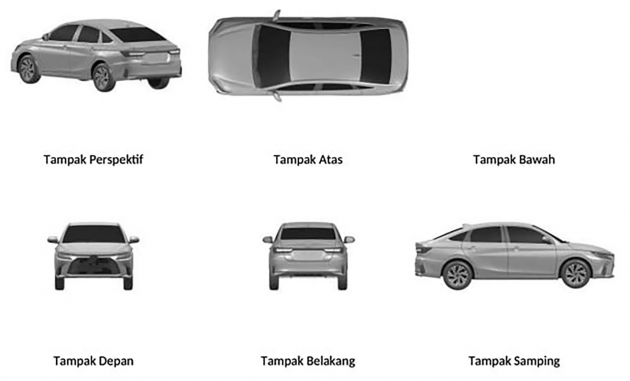 Perodua is another carmaker that works closely with Daihatsu, and the Malaysian carmaker has been widely rumoured to introduce a B-segment sedan at some point. The Myvi we know here is sold as the Sirion in Indonesia, and if you look at the AC100 Vios closely, you’ll notice a few familiar components as we’ve reported on before.

This adds to the speculation that a Perodua B-segment sedan is on the cards, but we’ll have to be patient and wait for further developments, if any. Perodua has declared in the past of its ambition to be an ASEAN R&D hub for Daihatsu and hinted at four future unidentified DNGA-based models after the Ativa during a presentation two years ago. Would you welcome a more affordable Vios?