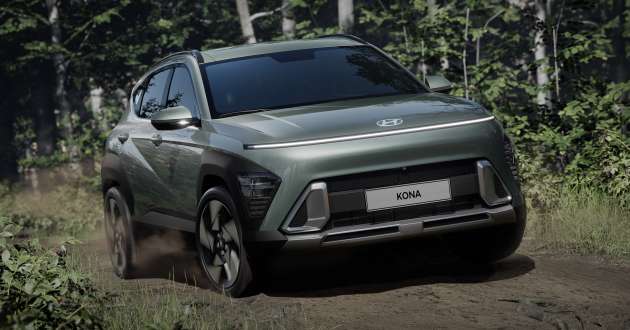 The Hyundai Kona made its initial debut over half a decade ago in 2017 and was given a facelift in 2020. Before 2022 draws to a close, the Korean carmaker is now giving us our first look at the second-generation Kona, which receives a radical redesign that underlines the company’s commitment to sustainable mobility.

As Hyundai explains, the all-new Kona was designed first and foremost to be an electric vehicle before being adapted for other variants. The EV version is joined by internal combustion engine (ICE), hybrid electric vehicle (HEV) and N Line models, all of which share the same architecture but set apart by distinctive styling.

At first glance, it is clear the Kona’s design was inspired by recent cars like the Staria and Grandeur, most notably by the full-width light bar in the upper portion of its face. Look closer at the EV variant and you’ll also notice the middle section of the light bar is pixelated (dubbed Pixelated Seamless Horizon Lamp) – a nod to the Seven concept from last year.

The pixel theme (referred to as Parametric Pixels) is unique to the EV variant (known as the Kona Electric) and extends to the lower intake grille, rear bumper, 19-inch alloy wheels and taillights, the last of which covers the full width of the vehicle. As for regular Kona with ICE and HEV powertrains, they get black wheel arch cladding as well as a rugged bumper and skid plate design.

Meanwhile, the Kona N Line has sportier bumpers front and rear, distinctive 19-inch alloys, silver side skirts, a wing-type spoiler, a twin muffler and optional black side mirrors and roof. All versions of the Kona also exhibit the brand’s signature parametric surfacing where the sharp diagonal crease of the sides connects the satin chrome moulding from the belt line to the spoiler, creating a contour that wraps around the entire vehicle.

If the latest Kona looks larger than its predecessor, that’s because it is. Hyundai says it wanted to provide maximised “living space” for its customers, so the new model has grown to 4,355 in length, which is 150 mm more than before, based on the EV variant. Width is also up 25 mm to 1,825 mm, while the wheelbase now spans 2,660 mm (+60 mm). 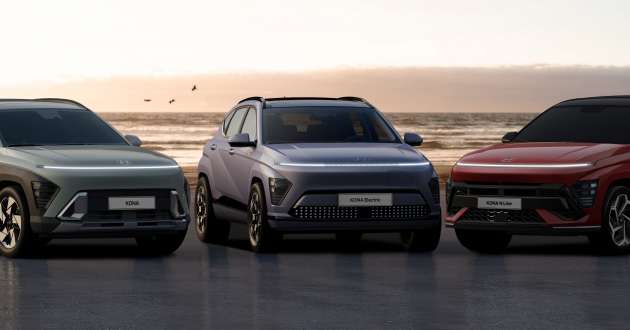 The lengthened wheelbase should allow for more legroom inside the cabin, which appears to be inspired by the Ioniq 5. Simpler and more modern than the outgoing model, the horizontal dashboard features rectangular air vents and plays host to dual 12.3-inch displays.

While the upper portion does bear some resemblance to the Ioniq 5, the Kona’s centre stack is noticeably different due to the abundance of physical controls for the media and climate control systems. Same goes for the upward-pointing centre console that houses charge ports and controls for the drive modes and other vehicle functions, but no gear lever – that’s been changed to a shift-by-wire stalk located behind the steering wheel to reduce clutter.

Hyundai says it will only reveal more details of the second-generation Kona in the coming months, so exact powertrain details remain unknown. It is rumoured the EV variant will be based on the Niro EV, while the ICE and HEV line-up will be carried over from the outgoing model. We’ll have to wait and see what’s in store, but for now, what do you think of the Kona’s redesign?